Leicester Fencing Club is primarily run by volunteers, they do this for the simple joy of encouraging more people to join in their favourite sport, allow me to introduce everyone here. 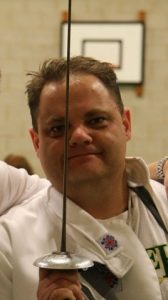 Craig has been one of the members of LFC for some time, he holds a grade one foil coach’s qualification and assists the beginners courses.

Caitlin and Libby have both been fencing for around 3 years now and take a keen interest in furthering the club for all of it’s juniors.