On 20/05/16 I visited the 3rd Earl Shilton Guides to take them through a taster lesson. I was delighted with the response I got from the girls. They were attentive and keen to learn (only a few fits of giggles). It’s wonderful when you teach a group of people and you see the progress and the change in them as the lesson goes on. We worked on footwork first but we didn’t linger on that because let’s be fair, everyone who try’s fencing wants to break out the swords!

After a fast run through of hits and parries we set up in a ladder and began matches. This is what I mean about seeing them progress; they started off fencing a little timidly but it didn’t take long to see the fencing become a little more competitive! By the end the girls were really fencing well, although it was sometimes it was hard to keep them from moving away from the traditional straight line and turning corners! See below for a few photos from the evening. Athos, Porthos & Aramis eat your hearts out!! 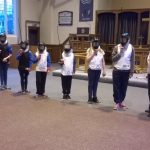 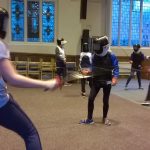 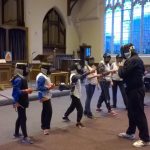