This weekend saw the Leicester club fielding a men’s Sabre team in the London region team fencing competition. The young team comprising of Jonathan Bellamy, Bryn and Rowan Guy faced some stiff opposition from the more Senior teams from Brixton fencing club and university of Kent fencing club. The Leicester team won the first 2 matches to win the Poole securing a place in the final. Brixton lost the play off, leaving a final between Leicester and Kent. It was a close match from start to finish with some very competitive bouts throughout the match. The Leicester team rose to the challenge and eventually managed to win the match 45-41. It’s good to see Leicester bringing  home gold! 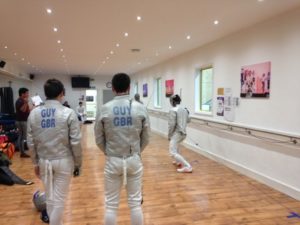